Facebook’s new email address rollout finally arrived on my doorstop today.  When I logged into Facebook today, I was asked if I wanted to activate the email address: chris.lontok@facebook.com.  Of course I said yes, and now I have the coolest email address I’ve owned since I had an @ibm.com address!

If you’re interested in getting an @facebook.com email address, just follow this link, for instructions on how to do it.

Is this going to change my life significantly?  Am I going to give up my handy-dandy @gmail.com address for Facebook?  Not today.  For now, the @facebook.com address is just a way to get messages from outside Facebook into your Facebook message box.  I don’t see any added functionality in the “Messages” section, so for now it’ll remain the place where my random event invitations go to die.

If Facebook steps up to meet the functionality of Gmail, I may consider it, but not today.

Panoramio – Pictures and local in one place 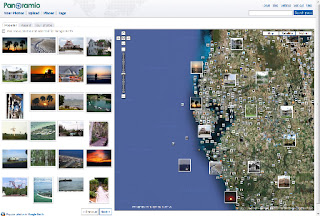 Like just about every other blog post that I write, this one came up as I was working in Google.  The thing I love about Google is their suite of inter-related on-line applications.  A quick synopsis of my typical day is: Gmail to Docs to Wave to Calendar to Blogger to Reader and back again.  Needless to say, I’m in and out of Map and Places all day long.

I’ve been doing a lot of work in Picasa recently, as a repository for pictures and another place where I can put relevant data for my customers.  The other day I noticed an option in Picasa to upload a picture to something called Panoramio.  Of course, I tried it and, in a nutshell discovered a great way to combine

I opened up my Gmail account this afternoon after lunch and was surprised to be offered something called “Google Buzz.” I launched it and the first thought that popped in my head was: “Google is going after Twitter.”

It looks superficially like Twitter and it’s fully integrated into my Gmail account. When I opened it I was already being followed by 4 people, I was given a list of 29 people to follow, and I had the option of connecting it to my blogs, my Picasa account and my Twitter account. It also already had 2 postings on there from my last 2 blog entries.
The postings have options on them to Comment, Like, or Email them to other people.
It has the option to post pictures, videos and links and does not have the 140 character limit that Twitter gives you. The online “buzz” is that this is Google’s attempt at a Twitter killer. Only time will tell.
Categories : Blog
Tags : blog, Gmail, Google, Google Buzz, Twitter
The Internet Adventure | Copyright © 2021 All Rights Reserved
iThemes Builder by iThemes | Powered by WordPress